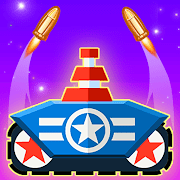 Voodoo has always been famous for its simple games but highly addictive. Referring to Voodoo, many people will think of Helix Jump or Hole.io once a time of storming the offline game market. And at the end of 2018, this talented developer has just added a new game called Ball Blast. The game is currently released for free on both iOS and Android operating systems. If you are looking for an effective entertainment game, this is a great choice.

So far, the ball has always been an endless source of inspiration for Voodoo to create their products. From Dune, Fire Up or Rolly Vortex, the ball is always the focus of the game. This is a very interesting point when only simple balls, developers can create many different titles with great addictive ability. Besides, the numbers that appear in this game brings a sense of attraction to those who like to calculate and put logic as a guideline for their gameplay trend. This combination will definitely bring many interesting things for players.

In Ball Blast, your mission is to control a mobile cannon to shoot down enemies. The cannon will be fired automatically, just drag your finger to the side to move. Your opponent will fall from the sky and bring in different numbers. The more you hit the ball, the less the number will drop until they reach 0, the ball will explode and drop gold coins.

However, the ball will not stand still for you to shoot. Round spheres with extremely high elasticity when falling to the ground will bounce and continue to fall. When they are in the air and fall on you, you lose. That is not all! With each big ball you encounter, shooting them down will split into 2 more balls with a score equal to half of the original ball. They will keep separating the score each time you shot until the ball size is not enough to do this.

The number of points per sphere does not depend on its size. When looking at a falling ball, be careful if it is split into two and fall on your head. A case exists in Ball Blast, which is small balls but has several times the number of normal balls. Statistics show that 30% of players killed are caused by these small balls. Whether you recognize this or not depends greatly on your sanity and mastery of the game.

The more balls you break, the more points you will gain. When you win a certain number of points, you will unlock the next level. However, the difficulty of the game will increase with the level. The higher the level of play, the more the ball appears and moves faster. At such times, you can discover your limits.

Ball Blast is created in the style of an endless run game, ie the balls will keep falling until you make a new mistake. However, that brings an interesting feeling to the game because when losing when in progress, players will have the psychology to play more to establish a higher record. Please try your best and invite more friends to join this game.

The difficulty increases with the level that requires more advanced weapons to overcome them. The guns with great destructive power, allowing players to shoot down balls faster is an indispensable item when players play up to the later stages.

The money you collect throughout the game journey will now maximize your ability when they can be used to purchase items inside the store including firecrackers. The guns with cool shapes will help you win every challenge.

Ball Blast has eye-catching graphics, simple like other games from Voodoo. Wide view, more bright colors are changed through each different level will not make you feel bored. The upgraded cannons are also equipped with beautiful accessories. I think this game can satisfy even the most demanding players.

Unlimited Money: You have a lot of diamonds.

When using Ball Blast (MOD Unlimited Money), you may wonder when you only see 0 coins when opening the game. Do not worry. After you collect the first gold coin when playing, you will be provided with an infinite amount of money. That money helps you unlock firecrackers and many other things in the store. However, you still need to reach the required level with each cannon.

Ball Blast is a simple game that you can play anywhere, anytime. A few games after each stressful lesson, tired working hours or every time you wake up to get inspired for the long day is also a good ideal. Are you ready to participate in this unlimited ball shooting game?

You are now ready to download Ball Blast for free. Here are some notes:

8.31· Sports
MOD MOD Menu with Many Features
Home › Games › Arcade › Ball Blast 1.64 APK + MOD (Unlimited Money)
We use cookies on our website to give you the most relevant experience by remembering your preferences and repeat visits. By clicking “Accept”, you consent to the use of ALL the cookies.
Do not sell my personal information.
Cookie SettingsAccept
Manage consent