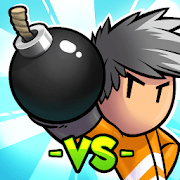 If your childhood was associated with arcade games, you probably know the legendary bomber game Bomberman. With simple gameplay, easy to understand but extremely interesting, the game produced in 1983 easily created a storm at that time. Why did I mention Bomberman? Because the game today I introduce to you, Bomber Friends is considered the most successful version of Bomberman for Android devices.

Bomber Friends is the most popular Bomberman game on Google Play. The game of Hyperkani has reached more than 50 million downloads on Google Play, and that number is constantly increasing. When playing console, you needed four friends to play Bomberman. If you play alone, your only option is to play with AI. With Bomber Friends, the game allows you to play with online players around the globe. You can invite your friends, team up and fight together with other players.

The story begins in a small town, where our hero Bomber lives a peaceful life with friends and family. But those peaceful days did not last long. One day, orcs attacked the village. They destroy everything, kidnap the entire villagers. His friends were taken to a remote place, the land divided into many small islands including Grassland, Desert, Cursed Castle, Winter Valley. You will help Bomber to adventure through strange lands, fight monsters and rescue his friends.

The gameplay of Bomber Friends is not much different when compared to the classic Bomberman games. You control the character moving in a maze and placing bombs to break bricks. You have a chance to get some upgrade items when you break a brick. Some brick cannot be destroyed, you should use this to “trap” the enemy in a prison with bombs and brick walls.

You use the joystick on the left to control the character moves, the key on the right helps you place the bomb. Controls are not complicated. The important thing is that you need to find tactics to defeat the entire opponent. In my opinion, you should focus on collecting lots of items in the early stages of the match. When you have more bombs, the bombs have a wider range, you have an advantage over your opponents.

In order to bring players the experience of the classic Bomberman series, Bomber Friends does not have too much difference if you have played the original games on the console. The game owns classic 2D graphics with beautiful effects. Besides, the sound is also quite well.

When breaking a brick, you have a chance to get some of the following items:

Classic mode: The system will match you and three other players into a match. Destroy all opponents to win.

Adventure mode: Find the key to open the secret gate, help you advance to the next level. Each level has a number of monsters that hinder your journey, you can defeat them, or ignore them. Help Bomber on his journey to find his friends and family.

Multiplayer mode: You play against other online players. This mode can have 6 or 8 players. Defeat the whole opponent to win. After 30 seconds, the walls will collapse, the map will shrink.

Reversi Tournament: Painting the entire map with bombs. You cannot break brick walls in this mode. When time runs out, the player who paints more broadly is the winner.

Team Battles: Players are divided into two teams. You and your teammates must defeat all members of the enemy.

Bomber Friends has three currencies, including Goldbars, Diamonds and Coins. Goldbar is the currency that helps you buy certain types of game items. Coins help you upgrade characters, while Diamonds help you unlock items and epic characters. You can also buy gold and diamond coins. However, you can only get diamonds by completing quests or buying with cash.

If merely bombing is boring. Bomber Friends offers you an in-depth character upgrade and customization system. You can use Coin to upgrade your character.

Bomber Friends is an online game and completely free. Therefore, you can watch ads to increase the amount of Goldbars received after each match. However, sometimes ads also cause some nuisance for players.

Our MOD version unlocks all glasses, hair, eyes, faces, costumes. You can freely customize your character.

You have to download and install our original APK file and Bomber Friends MOD APK as usual. If you have questions, leave a comment below the article. We will reply to you as soon as possible.

Updating the MOD version without losing the game data

You only need to download the MOD version with the game and install it. The device will automatically override the new version on the currently installed version.

Note that you can only update without losing data if both the old and new versions are downloaded from ANDROIDMODX.

Many factors helped Bomber Friends become one of the most successful versions of Bomberman. Fast-paced action game with many interesting features, this game brings you the best experience. Above is information about the game and its MOD version. You can download the game via the links below.

You are now ready to download Bomber Friends for free. Here are some notes:

11.3.0· Action
MOD Unlimited Money/Coin
Home › Games › Action › Bomber Friends 4.38 APK + MOD (Skins Unlocked)
We use cookies on our website to give you the most relevant experience by remembering your preferences and repeat visits. By clicking “Accept”, you consent to the use of ALL the cookies.
Do not sell my personal information.
Cookie SettingsAccept
Manage consent