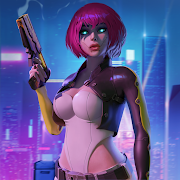 Cyberpunk Hero is a roguelike that uses the concept of Cyberpunk to develop worlds, characters, levels, and other content to immerse players in every battle. Moreover, the pace and excitement of each fight will gradually increase over time or based on the player’s achievements. Some new mechanics or systems will also gradually unfold to accommodate the player’s pace, giving them plenty of great exploration of the roguelike genre combined with a futuristic and epic concept, Cyberpunk.

The nature and pace of gameplay in Cyberpunk Hero are fast and furious, making players constantly fight without a break. Each level has its mechanics, and if the player does not destroy the waves within the allotted time, new waves will appear and create more pressure. Also, the more, the merrier, and the players will enjoy the cyberpunk-style levels’ exciting combat characteristics.

The control mechanism in the roguelike genre is also simple, and the player only needs to use one finger to control, dodge, and attack all enemies. Fortunately, the system will automatically attack the nearest targets, and the character will only attack when stationary, allowing the player to combine hit and run effectively. Meanwhile, the system will indicate the enemy’s attacks to dodge or repel with special abilities from the character.

The variety of characters will also affect the quality of gameplay and the player’s experience in Cyberpunk Hero. Each character has many interesting characteristics, such as stats, attacks, abilities, and augment systems that make them stronger in complex and difficult levels. What is most impressive is the attack effect or passive ability that goes into effect throughout each run attempt to support the player fully.

COMBINE SKILLS FOR THE GREATEST EFFECTS

When a player up a level, they must choose one of three random skills given by the system and then combine them for a more outstanding effect. All skills are also divided into several categories, such as an attack, defense, and support, to diversify everyone’s fighting style. Depending on the unique fighting style, players can create countless amazing combinations and complete all run attempts.

The player’s battle will feature various cyberpunk biomes introduced in Cyberpunk Hero, and they all feature distinctive designs and styles. They also affect the types of monsters that appear in each level, promising to bring players many different experiences when facing them. Above all, depending on the number of levels in the biome, the game will have rewards compatible with the player’s achievements.

Boss battles are always the peak of excitement as they have many dangerous attacks and always take the player by surprise. Although most of their actions are regulated with indicators, some unexpected actions can surprise players and create many openings for failure. Even so, bosses always drop many nice rewards, including upgrade parts for every character the player is using.

Cyberpunk Hero is an excellent combination of the “shoot ’em up” genre with a roguelike, giving players new experiences when fighting in endless waves. In addition, the character upgrade system introduced in the gameplay also opens up new possibilities for players to diversify their fighting style after finding or combining corresponding skills from all levels.

You are now ready to download Cyberpunk Hero: Epic Roguelike for free. Here are some notes:

Home › Games › Action › Cyberpunk Hero v1.1.1 APK + MOD (Menu/Damage, God Mode)
We use cookies on our website to give you the most relevant experience by remembering your preferences and repeat visits. By clicking “Accept”, you consent to the use of ALL the cookies.
Do not sell my personal information.
Cookie SettingsAccept
Manage consent