Prevent the enemies attacking and Grow your kingdom powerfully

- Improved game system. - Bug fixes.
Explore this article
DEFEND THE KINGDOM FROM MONSTERSINCREASE DEFENSE POWER IN MANY WAYSSTRENGTHEN YOUR ARMY

Grow Kingdom allows you to take over a kingdom that other enemies will always threaten. They are completely crowded and appear in different waves, and require you to attack them before destroying your gate. At the same time, with the number of heroes, soldiers, and many interesting mechanics, you will build a strong defense. 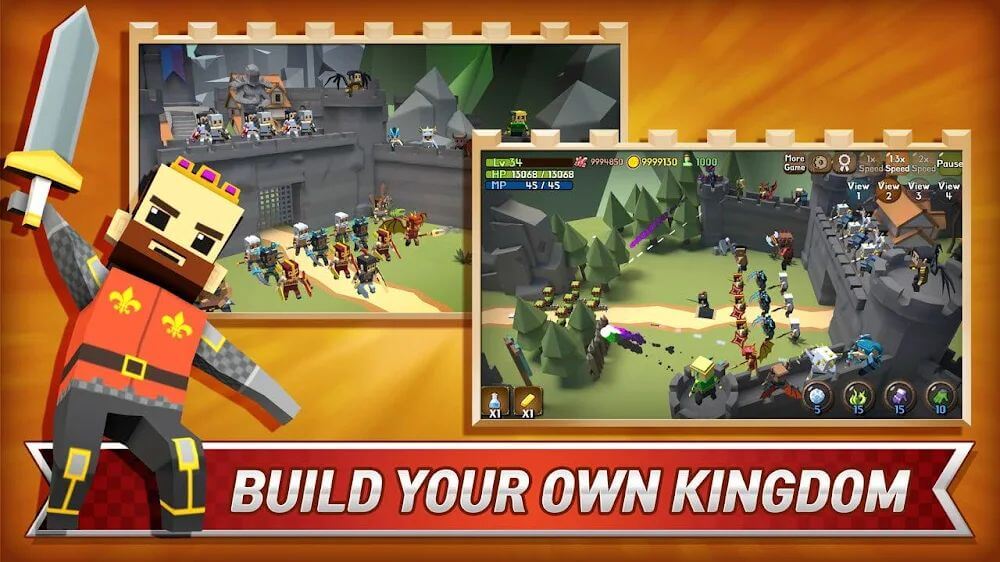 DEFEND THE KINGDOM FROM MONSTERS

Players will be able to observe a kingdom that has been built and has many elements for you to explore. The important factor that you should pay attention to is the fortress where the heroes and soldiers are constantly protecting. At the same time, this is also the right attack point for the monsters that constantly appear in front of you, and you will be the one to decide the strategy to fight them. You can observe the battle with different perspectives that you can choose according to your wish. 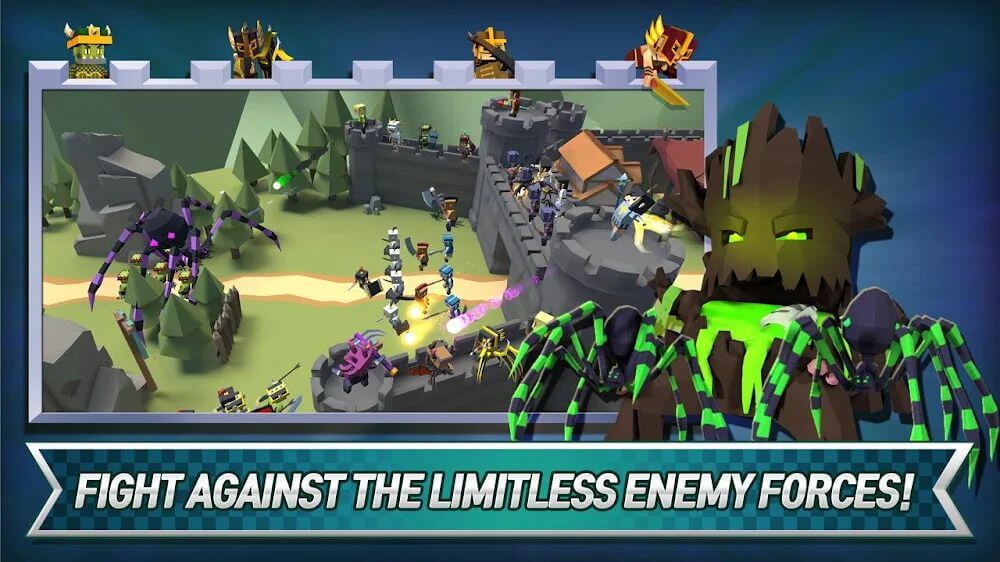 INCREASE DEFENSE POWER IN MANY WAYS

In Grow Kingdom, players will focus on the castle gate and know the gate’s level to perform the upgrade process. At the same time, this upgrade process will affect many aspects and make your defense more stable, such as increasing the number of troops that can be added, increasing the level of fortification and many other factors. You will be able to see the portal’s HP bar displayed when the battle begins.

In each level of this game, players will find two characters: heroes and soldiers. The number of soldiers and heroes will often be different because soldiers will often be more, but the fighting power of heroes can be improved by giving them equipment. So, these two forces will help you defend the castle against the enemy, and after the preparation is complete, you will observe what happens in the battle. 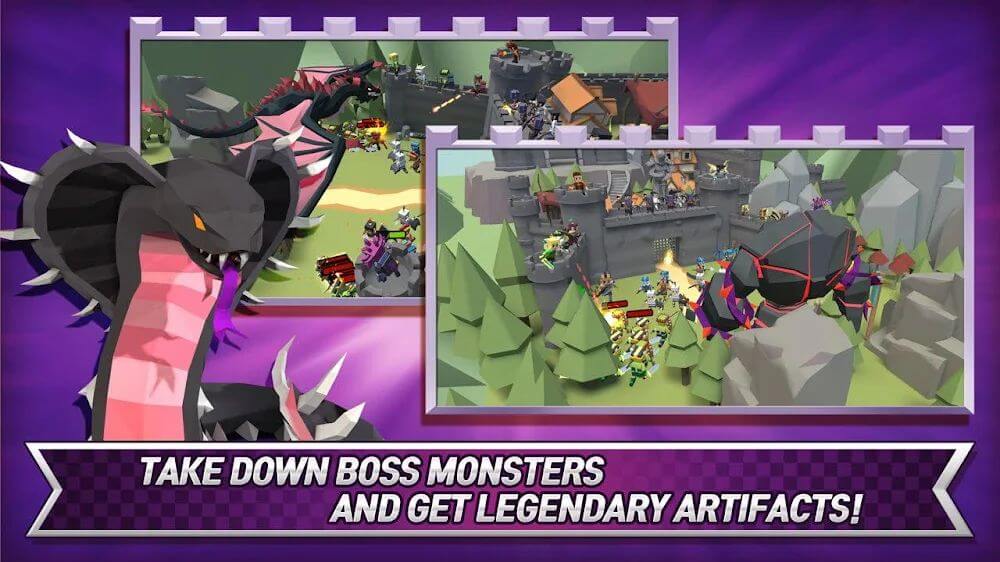 The battle will take place under your watch, and you will not be able to change tactics once it has started, and you can only support with some methods. At the same time, everything will end when one side is defeated, so that’s why you need to build a strong gate. You can also add different soldiers if you have enough resources and your castle meets the requirements. Certainly, the upgrade is necessary because the enemies are constantly appearing.

In Grow Kingdom, players will find Archer, Infantry, Lancer, and other units and the number of gems you need to add to a unit. At the same time, they can all use the money to improve their abilities, and the money you earn can be made in many ways, such as through battle or using prisoners to do various jobs. You can also see the number of heroes you can unlock, and they have their unique characteristics. 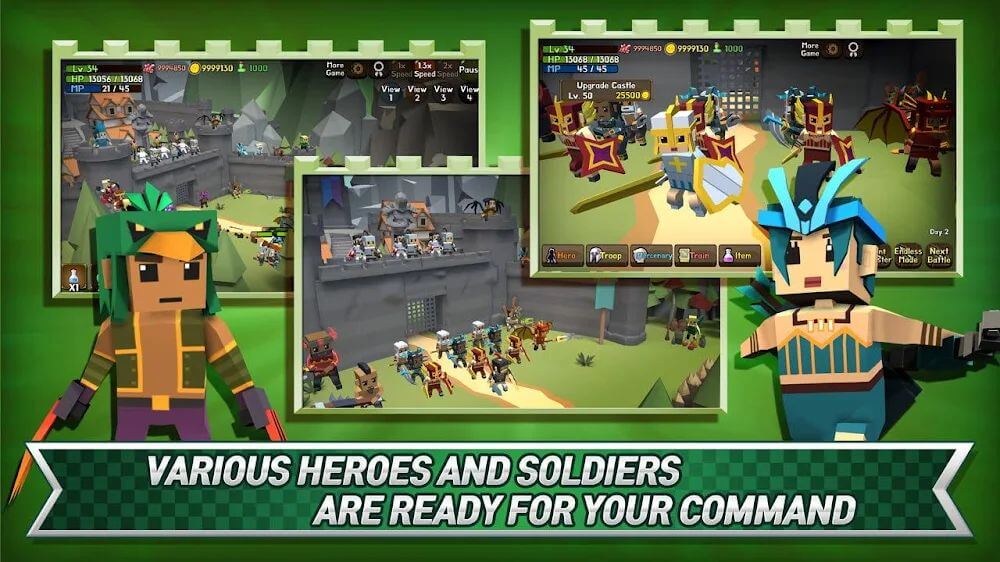 An interesting point when you use various types of troops is the effects you can receive when the relevant troops join the battle. At the same time, the train system is similar to a skill tree, so you can upgrade some production mechanics, strength, and many other factors with the number of points you have. Surely you will be able to reach an impressive power to destroy the enemies you see.

Players will be able to find a kingdom in need of protection from monsters:

You are now ready to download Grow Kingdom for free. Here are some notes:

1.6.2· Simulation
MOD Unlimited Diamond
Home › Games › Strategy › Grow Kingdom v1.3.5 MOD APK Mega Menu, Unlimited Money, EXP
We use cookies on our website to give you the most relevant experience by remembering your preferences and repeat visits. By clicking “Accept”, you consent to the use of ALL the cookies.
Do not sell my personal information.
Cookie SettingsAccept
Manage consent