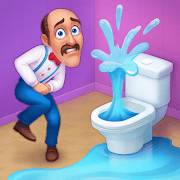 If you’ve ever watched the top list of Play Store charts, you’ve probably seen Austin’s happy face on the Homescapes icon, as well as the previous version, Gardenscapes. Both games have attracted millions of players around the globe in recent years.

Why? Just like Township and Gardenscapes, Homescapes is a simple but cleverly designed game. I believe that Playrix Games has scrutinized favorite genres: puzzle like Candy Crush and decoration like The Sims. And thus creating a game that combines both these genres, as well as adding a storyline throughout.

In other words, Homescapes has done what other titles did not do when creating and always makes players curious about what will happen next.

Interesting plot, bringing us back to childhood

Sometimes, when we dream of returning to childhood, those are the most memorable dreams. And so is Austin. Austin is a butler, and he has lived in many different homes, but the only house he lived with his parents made him the best. Austin’s childhood home brought him a lot of good memories and he decided to return to his house after so many years away.

After a long voyage, Austin was surprised by the interior of the house which was severely degraded after a long period of unused use. He remembers that his parents are no longer there and things are getting old: the carpet should have been discarded for a long time, the room was dusty after a long period of unused use, the chair was frayed torn, broken stairs … Mr. Austin thought to repair the house to welcome his parents back.

You will be role-playing as Austin’s companion, helping him solve the match-3 puzzles in exchange for gold coins so Austin can buy the necessary items. Your task in the game is simple, just match the same items into a vertical or horizontal row to make them disappear, depending on the game conditions set in each level to complete. Typically, cross-screening conditions are to collect or remove certain tiles, remove tiles from within the jelly, break cookies, and more.

Each mission is a stage when completed, Austin will have money to repair an item in his childhood home. When connected to four consecutive cells, five consecutive cells or six cells forming a right angle will produce special boosts that will destroy many items around. The game has over 400 missions of 400 different levels waiting to challenge you.

With the money earned while playing the game, you not only help Austin replace the damaged items in the house but also help him purchase new furniture such as installing fish tanks, armchairs, doorbell … And to At the end of the day, or when completing a quest, you will receive a bonus to help Austin buy the items needed for the house. Remember that money in the game Homescapes is very important.

Not just a puzzle game

Besides this fascinating puzzle mechanism, Homescapes also has an amazingly rich world for you to explore. You can see Austin bringing interesting surprises to parents with new items for the family, as well as meeting new characters with their own eccentricities.

The game also has a Facebook-style message line, “Homespace,” showing you what Austin and the other characters are doing. And of course, he also has his own Instagram channel!

In terms of design, Homescape is based on a 3D engine with cute, animated graphics. The game is suitable for all players, especially girls and those with a lot of free time. In general, Homescapes is an easy to play and quite fun game. Get this game and help Austin’s housekeeper build his childhood home.

Unlimited Stars: In the MOD version, you will have Unlimited Stars. Note that stars will not be unlimited at starting but will not decrease when you use them.

As such, there are many interesting points in Homescapes – a great combination of puzzle play and building houses and the art of storytelling that has brought joy to millions of players. If you’ve yet to explore Austin’s somewhat bizarre world, now is the time to start.

MAKEOVER• Help a young college student express her individuality!• Change the character's style!• Decorate the room for a party!SEASON'S GREETINGS• Uncover the secrets of William's story and get ready for the Holiday Season!• Get a Christmas tree!ROYAL TEAROOM• Renovate the palace for a tea party.• Get a unique profile picture!ALSO FEATURING• Holiday Season! Get a merry-go-round with the Golden Ticket!• Restore the train station!• Help Olivia publish her book!

You are now ready to download Homescapes for free. Here are some notes:

12.10.120· Puzzle
MOD Unlimited Money
Home › Games › Casual › Homescapes Mod Apk Unlimited Stars v5.1.3
We use cookies on our website to give you the most relevant experience by remembering your preferences and repeat visits. By clicking “Accept”, you consent to the use of ALL the cookies.
Do not sell my personal information.
Cookie SettingsAccept
Manage consent