Welcome to Kick the Buddy Remastered! The game that helps you deal with the anger that you accumulate throughout the day

We are ready to make your game experience even greater. Bugs are fixed and game performance is optimized. Enjoy! Our team reads all reviews and always tries to make the game better. Please leave us some feedback if you love what we do and feel free to suggest any improvements.
Explore this article
Introduce about Kick The Buddy RemasteredAn effective stress relieverGameplayDiverse optionsAn effective, civilized, and non-unfortunate way to relieve stressGraphics and soundMOD APK version of Kick The Buddy RemasteredMOD featureDownload Kick The Buddy Remastered MOD APK for Android

Kick The Buddy Remastered MOD APK is an arcade game from the publisher Playgendary Limited. It will be a place for you to vent all the stress and troubles of the day on a puppet character named The Buddy. A game for relieving the mood gently like this is worth playing, isn’t it?

Introduce about Kick The Buddy Remastered

This is what you need to release your anger!

It is a game that’s guaranteed to make all your anger and stress evaporate. Simply because it gives you a place, or rather, a thing to vent your anger on freely without any consequences.

The main character is The Buddy, an adorable fabric dummy. And you, as the owner, can do anything on your Buddy mercilessly. After that, the stress you are having in real life will somewhat cool down.

The gameplay is extremely simple. You can choose different forms of actions on Buddy, such as shooting, throwing Halloween pumpkins, using saw blades, or lasers. Your task is to hit Buddy as much as possible because when you start hitting it, it is not easy to stand still. Buddy will run and jump around, sometimes so fast that it’s hard for you to aim.

You will be led into a place like the main menu of the game, called Buddy’s Notepad. In Buddy’s notepad, there are many things to explore: Stuffs, Profile, Decor, Extra… Each section has a series of strange items. For example, in the Stuffs section, there are Animals, Sport, Horror, Power of Gods, Jack O’Lantern, Broomstick, Necromancy, Trick or Treat, Explosion. In Explosion, there is a long list of weapons: Beretta gun, Coonan, Uzi, Thompson, M16, AK47, Musket, Spas 2…

You can embellish your Buddy dummy in detail such as clothes, shape, and you can select the surrounding landscape. The most interesting is the weapon selection. You will have a lot of things to ‘torture’ Buddy, depending on your feelings and preferences. Some items are always available, but many items require a certain level to be unlocked. But rest assured because the many items available in each round will be enough for you.

Reading through the list of Explosions, can you imagine what you would do with the Buddy dummy with the above weapons? You can throw grenades to explode the box where Buddy is in, you can shoot, throw sharp objects (like mace), heavy objects (like Halloween pumpkins), and you can freeze… and you can even do fantasy things like summoning the gods to ‘take care’ of Buddy.

An effective, civilized, and non-unfortunate way to relieve stress

Imagine that Buddy is the target of the projectile, the object causing your frustration. Actively choose a weapon and hit as many attacks as possible on Buddy to relieve stress. If you play this game when you really get mad, it’s super exciting, I believe.

Instead of having to run to the gym and punching in a sandbag.

Instead of throwing away the dishes in the house, or any technology item.

Instead of having to find a quiet place to scream like a madman.

Instead of finding someone to make trouble with and then put your anger on them.

These things are a waste of time, effort, and money. Also, the consequences are sometimes extremely large. You know, damaged furniture cannot be bought back, damaged feelings cannot be repaired… Meanwhile, just playing Kick The Buddy, the storm anger calms down within a few minutes, you won’t need to do those crazy things anymore.

Obviously, fast hands and quick eyes are the keys to the win. Most importantly, every time you hit right on Buddy, the dummy will have different lovely reactions. Being hit by a gun, he screams “huiza huiza”, being hit by a mace, he screams “yahoo yahoo”… When he lies still and you do nothing on him, Buddy also emits loud and boisterous sounds for tantalizing.

Spatial graphics are simple but fancy. The effect of fire and explosion is quite fierce. The Buddy dummy, in addition to the normal hum and sound when being hit, is ‘adorned’ by the injuries make-up such as scratches, bruises, burns. Or worse, his body is stretched. Your anger may reduce a lot when seeing these scenes.

The game has funny visuals and interesting noises. The gameplay is so simple that there is no need to think at all. Drop your soul into the “stress relievers” on Buddy cloth mannequin, you will see how much trouble you have in your mind disappear. 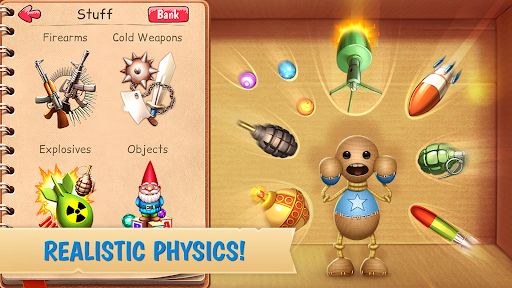 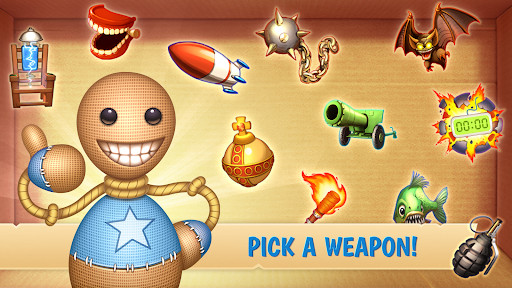 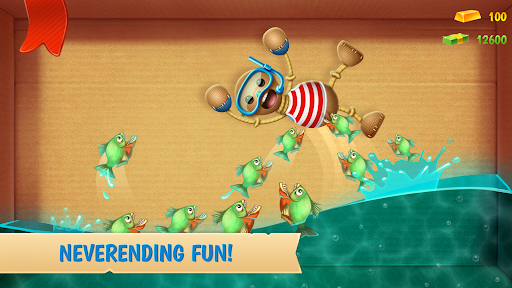 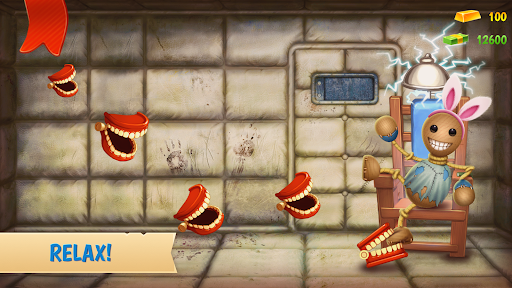 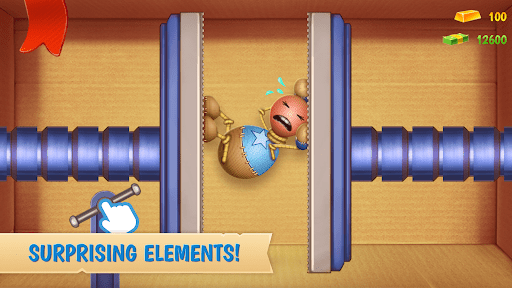 You are now ready to download Kick The Buddy Remastered for free. Here are some notes:

14.00.15962· Racing
Original APK
Home › Games › Arcade › Kick The Buddy Remastered Kick The Buddy Remastered v1.2.6 APK + MOD (All Unlocked)
We use cookies on our website to give you the most relevant experience by remembering your preferences and repeat visits. By clicking “Accept”, you consent to the use of ALL the cookies.
Do not sell my personal information.
Cookie SettingsAccept
Manage consent