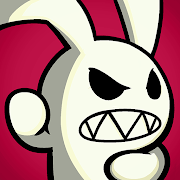 Skullgirls is set in the kingdom of Canopy, where people at a time are trying to find an artifact called Skull Heart. Legend has it that, every 7 years, this artifact will give the woman who found it a wish. If her soul is pure, her wish will come true. Otherwise, she will be cursed and transformed into a creature known as Skullgirls.

And then, the kingdom of Canopy is in danger of being destroyed when Marie – the new Skullgirls was born. You will have to build up your army to fight her.

Join Skullgirls, you will join the fight with the villains. Your mission is to defeat all enemies before time runs out.

The controls in the game are quite flexible. You touch the right side of the screen to perform punches or kicks. Meanwhile, touching the sides of the screen at the same time will create a critical attack.

Content in Skullgirls is based on a tree model. You will choose the points (nodes) in the tree to play. That also means that, you can choose challenges. This model is quite flexible, it was also used in the game Marvel Contest of Champions by Kabam Games. Note that the Bosses appear at the special nodes, and that’s something you can’t avoid.

As mentioned earlier, Skullgirls is a typical Gacha mechanic game. That means, you will get a random character when you open the cards or use lucky spin. Characters have separate stats and abilities. They are also ranked, and if you want to get rare characters, you will have to spend a lot of money to buy special cards.

Each character in the game belongs to a certain class, that is what gives them special skills. With this feature, Skullgirls brings a lot of tactics for each battle. You will have to create the right team formation or select the right point on the tree if you want to increase your chances of winning.

Characters can also level up. That gives them attribute points and the ability to unlock new combat skills. You can test each character’s skill in “Skill Tree”.

There are two types of rewards that I want to mention: the daily rewards and the winning rewards.

Skullgirls encourages players to log into the game every day by awarding them rewards. Just work hard to open the game every day, you also have the chance to receive many valuable items, such as coins, diamonds, ticket characters and keys to open special chests. Skullgirls also has a newbie event. They will receive a new character when logged in for 7 consecutive days.

Winning rewards include experience points (for the party to battle), coins and diamonds. The amount depends on the performance you achieve. For example, beating the opponent in a short time or your team does not lose a member.

In addition, Skullgirls also has a system of daily quests. This is the system that gives the player a lot of resources.

Rift Battle is the most notable mode in Skullgirls. Here, you can connect with other real players to compete and score achievements. The game’s matchmaking system will automatically search for opponents that match the strength of your squad. However, you will have to arrange your squad first and cannot change members once the battle begins.

To easily take advantage of online opponents in Rift Battle mode, you must understand the power nature of each character and master control skills. If you feel your skills and knowledge are not good enough, you should practice more in Training mode. The system will provide suggestions and corresponding instructions to help you improve your skills and tactics.

No Skill CD: MOD APK version reduces the cooldown time to zero. Thanks to that, you can continuously attack your opponents and win faster.

While you don’t have to wait for your character to cooldown, keep in mind that your opponent can still attack you. Some bosses are capable of very high damage, so you should combine defense, dodge if you do not want to lose the battle.

Skullgirls has a detailed content system with dozens of characters for you to unleash. Marie is threatening the survival of the kingdom of Canopy, you should summon the best trio of heroes to stop her evil plot.

4.10 Update Notes- HOLIDAY EVENTS AND GIFTS - Enjoy free Gifts and special events throughout the Holidays!- NEW FIGHTERS - Be the first to experience Fukua - Dream Demon, Cerebella - Blitz & Glamour, & Robo-Fortune - Vector Protector!- FIGHTER UPGRADES - By popular demand, 11 Fighters have been buffed!- TRIBUTES - Use Skill Points to purchase Fighters and Moves in the Cabinet of Curiosities!For the full lowdown, check out the update notes on our forums!skullgirlsmobile.com/updates

You are now ready to download Skullgirls: Fighting RPG for free. Here are some notes:

1.5.34· Racing
MOD Unlimited Money/No Freeze
Home › Games › Action › Skullgirls v4.10.0 APK + MOD (Menu/Damage, God Mode)
We use cookies on our website to give you the most relevant experience by remembering your preferences and repeat visits. By clicking “Accept”, you consent to the use of ALL the cookies.
Do not sell my personal information.
Cookie SettingsAccept
Manage consent