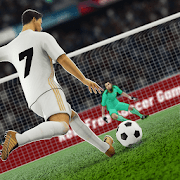 MOD Info
( you can rewind your wrong hits as much as you want during the match).
Explore this article
SIMPLE PLAY, EASY TO PLAY MASTERDIFFERENT PLAYER SYSTEMS, WITH CLEAR CLASSIFICATIONBEAUTIFUL 3D GRAPHICS, PERFECT DETAILS SIMULATIONSUPPORT MONEY AND UPGRADE THE PLAYERSOFFLINE SUPPORT GAME, YOU CAN PLAY ANYTIME
Rate this post

Become a super soccer player with Soccer Super Star. A legendary football role-playing game where you can unleash your peak skills and tight tactics. The game is created with realistic 3D graphics, vivid sound, sophisticated and perfect design techniques. If you are a fan of fiery matches on the pitch, this is definitely the game you need to experience right away.

To control all 11 players on your field, all you have to do is hold, swipe and move on the touch screen. The screen will be divided into two sides, including the moving part and the keys to pass close, pass far, shoot. You just need to move the player holding the ball, pass or shoot in the right situations at the simplest level. The players marked on the top are the ones being controlled by you.

However, if only so, Soccer Super Star will hardly become a top-notch game. Once you have mastered the basic movement and passing keys, you will have to learn more about combining them to create beautiful skills through people. They not only create a feeling of excitement but also create a surge in your attacks. The first matches may only require accuracy in basic moves, but the game will become more difficult later on. At this point, the skills through people are beneficial.

Soccer Super Star is almost entirely updated with players as well as outstanding teams in the world. Players are equipped with specific stats to shape their forte playing position, such as shooting, passing, fitness, skill, interception, speed, etc. Depending on the index, the players are assigned the right position of their forte as in reality.

The grass stars in this game are what any player wants to own. However, they are often high value, and you will have to spend a lot of gold to get them. In return, these superstars have significantly superior stats. Another unique thing in this game is the appearance of legendary players, in fact, have retired a long time ago. However, these players are not always available; you have to wait for the opportunity, accumulate enough gold, and seize the opportunity as soon as they are for sale.

This is a highlight of Soccer Super Star. The players in the game are animated in 3D; you can see them realistically in the store. Spectator effects, pitches, passing techniques, passing people, catching the ball, celebratory effects, even small details like electric lights or billboards are all faithfully reproduced; realistic, sophisticated, and eye-catching.

Replay technique or 3rd person perspective gives the player a more holistic view. Curved balls on the field made from long passes, free kicks, or corners make players feel like they are standing on real grass. Accompanied by background music effects, commentator voices. All combined to make your ball game really attractive.

SUPPORT MONEY AND UPGRADE THE PLAYERS

The game rules are not only single matches, but you also get to participate in tournaments throughout. You have to fight straight, get enough points in the group stage, pass the matches in the final round and win the trophy for yourself. Through each match, the difficulty will increase. But don’t worry, you can collect gold from each victory, use it to upgrade your players. Depending on the initial value of the player, the stats will be raised to a certain maximum.

When the squad is strong enough, you will enter more advanced tournaments. Your opponents will be world-class clubs or strong national teams. Even at the end of each season, if you win, you have a chance to face the all-star team of the tournament; it’s really a top game. Teams and players will be constantly updated according to the latest squads in the world.

In offline mode, you can completely buy players, upgrade skills and participate in tournaments. However, some gold-earning missions will be limited compared to online mode, but it will ensure your match quality is entirely smooth, not affected by wifi or mobile data. You can even connect two phones face-to-face with your friend in online mode, which is a memorable experience. Now, remember to use the strongest squad and skills that you can use to win Soccer Super Star.

You are now ready to download Soccer Super Star for free. Here are some notes:

Home › Games › Sports › Soccer Super Star v0.1.7 APK + MOD (Unlimited Lifes)
We use cookies on our website to give you the most relevant experience by remembering your preferences and repeat visits. By clicking “Accept”, you consent to the use of ALL the cookies.
Do not sell my personal information.
Cookie SettingsAccept
Manage consent