Since 2009, the STEINS; GATE series has sold over 1,000,000 copies! STEINS;GATE, based on the anime currently being broadcast has finally been released for Google play! * The game supports Japanese on

Android Android Adventure
3.8 ( 114 ratings )
Price: $0
Download
Install Guide
1. Download the Official version through the Playstore. This will allow you to obtain the obb and some of the sd files. 2. Run the game once and let it download anything it needs. Text will be in Japanese, but I believe the option on the right is the “Ok/Proceed” option 3. Exit the game and Rename both folders in these locations “Android/data/com.mages.steinsgate” & “Android/OBB/com.mages.steinsgate” {Add an “X” or a number to the end of the “steinsgate” 4. Uninstall the game. 5. Install my modified APK, but don’t run the game yet, then rename the folders back to normal. 6. Download and extract the English patch files. 7. Copy the “files” folder and its contents to “Android/data/com.mages.steinsgate/files” and merge or overwrite the existing files and contents. 8. Run the game again. {for me each time I had to run and download stuff for this game it crashed up until the last step, lol. So if this crashes or force closes, just re-open it until the end of all the steps.} 9. The pre-game text is still in Japanese, but the game itself is in English. The option on the right (“はい”) is to confirm. Once you’re at the title, you can now purchase the full game from the bottom left. 10. After purchase the game may close out, just run it again. This time it may have to download all voice files, this is an approx. 1gb+ download so is patient. After it’s done it may close again {It did to me} 11. Run the game again if it closed out on you. Remember the option on the right (“はい”) is “Yes” to confirm. Now the game will run in English and you cna play the full game.
MOD INFO
Download the APK file and tap on it to install it on your device. Make also sure to uninstall your game first if you have it installed!, This is NOT a traditional MOD APK: this is a “Pre-Patched apk” and you MUST have LP (Lucky Patcher ) installed in your device to use this. You do not need to create a patched apk but only to tap “YES” when prompted by LP. Be sure you’re using the last version of LP to make sure it works for you. Bypass InApp Purchases and Unlock The Full Game *Mostly Full English Patch All storyline text is in English, some text on the phone you use in-game is still in Japanese, but still playable and able to figure out what you need to do. 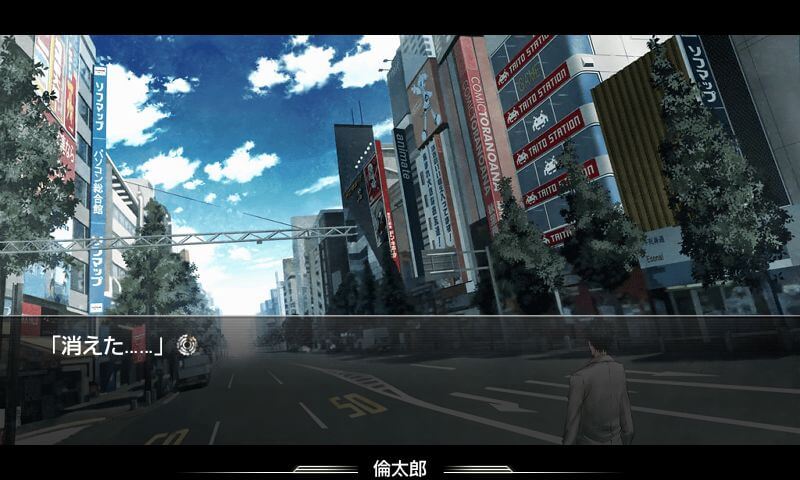 EACH ACTION THAT DETERMINES THE FINAL OUTCOMEMESSAGES AND CALLS THAT ALLOW YOU TO IGNORE OR REPLY. 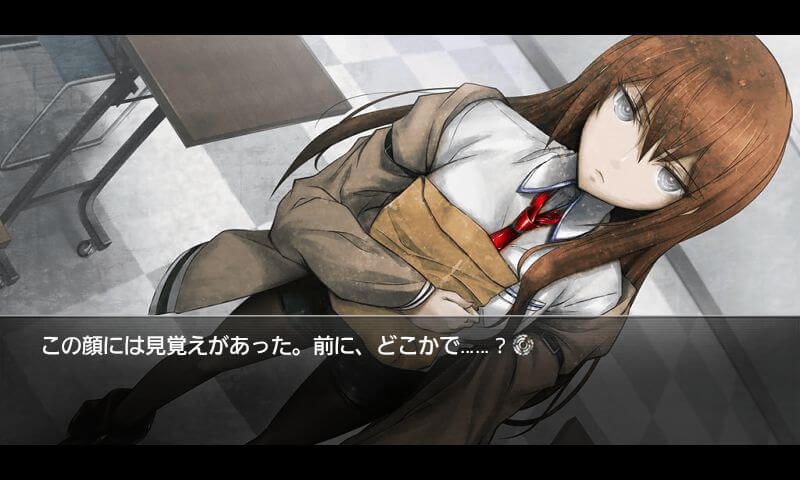 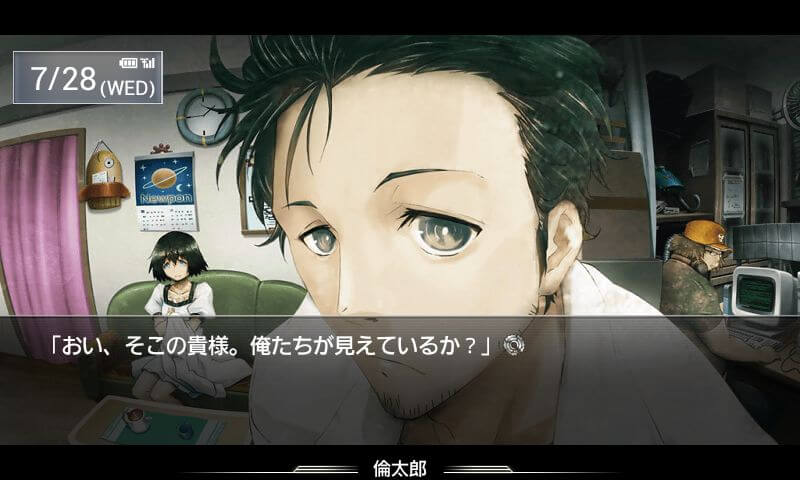 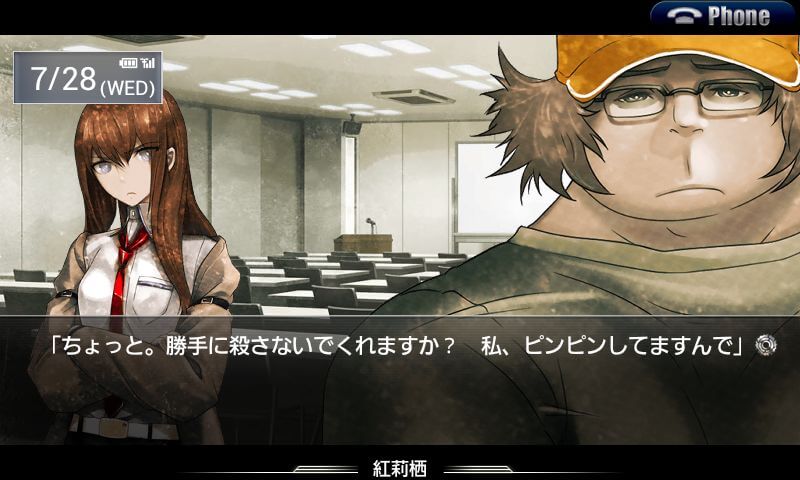 When arriving at STEINS;GATE, players will encounter many different scenarios in unique stories. You can interact directly with other players to find the right research methods. This game is a combination of 5pb and Nitroplus is inspired mainly by science fiction. This place is not just an ordinary trip back to the past like many other stories in other similar games. In particular, this place opens you to a sci-fi adventure.

EACH ACTION THAT DETERMINES THE FINAL OUTCOME

STEINS;GATE is known as one of the legendary visual novel games. We assert this because every decision you make in each of these stories will directly affect the later development and outcome of the very story you meet. It is your actions that will give players unique turning points. Not stopping there, you can interact directly with other players through amazing and intelligent conversations.

MESSAGES AND CALLS THAT ALLOW YOU TO IGNORE OR REPLY.

Speaking of interactions in STEINS;GATE, we can’t help but mention a series of special messages. When the player receives calls from other actual players around the world, the game allows you to perform two features. Firstly, you can reply if you want to chat and cooperate with them. Second, you can ignore it if you don’t want to communicate and feel that the upcoming communication is really useless. Every decision is at your fingertips.

Besides calls, we also bring you to chat messages. The game will highlight the message lines by highlighting them all with blue color. If you see them at first glance, you will sometimes mistakenly see the links. Here, like calls, players can accept and answer or ignore if they don’t like it. Your choices will determine the direction in the future.

Anyone who participates in this unlimited adventure can’t help but be surprised by this unique setting. The appearance of the Kaikan radio station is known as one of the landmarks in Akihabara, and this place has always been known as a paradise for those who love to discover and invent massive research works. Besides, millions of players know it because it deserves to be the empire of the most attractive electronic components.

Primarily, you will feel the most clearly about the law of cause and effect through stories from the past to the future at STEINS;GATE. The main character that you will play as is constantly building vehicles to be able to send messages to the past. The purpose of this is to try to change everything that has happened. The main character we mentioned above is Okabe Rintarō. Although he is only 18 years old, he has a unique personality that is extremely monstrous. In particular, he always admits that he is a mad scientist.

This is a character that is not trivial when the only ability is to perceive the change between the timelines. Most of the time, you’re doing research in the lab. Appearing before your eyes now is a person who is often delusional and has associations, unlike normal people. You’re talking to yourself on the phone, and you don’t stop making sly laughs.

The story began with the incident when Okabe and his friend came to the conference. Something unexpected happened when you happened to see Makise Kurisu’s body that someone killed. All around was blood and gore, which was terrifying. However, the strange thing is when you immediately send a message to your friend, suddenly everything here is no longer the same as before. Not only that, but your dead friend is also breathing in front of your eyes as if nothing happened.

You are now ready to download STEINS;GATE for free. Here are some notes:

1.2.1· Role Playing
MOD Speed Game
Home › Games › Adventure › STEINS GATE v1.13 MOD APK + OBB Unlocked, Free Purchase
We use cookies on our website to give you the most relevant experience by remembering your preferences and repeat visits. By clicking “Accept”, you consent to the use of ALL the cookies.
Do not sell my personal information.
Cookie SettingsAccept
Manage consent