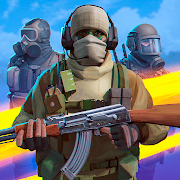 Rate this post
Android Android Action
4.5 ( 90 ratings )
Price: $0
Download
MOD Info
Explore this article
REALISTIC FPS EXPERIENCEDEFEAT MANY ENEMIES AND CAPTURE THE BASEWEAPON-TYPE VARIETY
Rate this post
An FPS game that offers a whole new experience is called War After: Shooter, and it can provide impressive entertainment times for you. In addition, players will participate in completely impressive matches that require specific tactics when playing. So you will coordinate with the players and complete the goal of the level. There have been certain balances to the guns and certain improvements in the visuals and sound in the latest update. When you experience War After: Shooter for the first time, you will surely be impressed with the beauty and the environment it can bring. The environment in the game is entirely beautifully designed, detailed and brings a specific attraction to the players. At the same time, the area in the game is also vast that you can see on the HUD, so it can be said that creating a good impression on the players will help players take the time to explore the game and immerse themselves inside. It is an FPS game where you and your teammates will try to complete the goal of this game and defeat the enemies that appear before your eyes. At the same time, you can also change the way the character holds the gun, aiming or sliding a certain distance in the game. It can be said that the completely new control experience that players will need to adapt to coordinate with their teammates properly. So, there will always be an opportunity for you to increase your shooting skills.

DEFEAT MANY ENEMIES AND CAPTURE THE BASE

The available gameplay of War After: Shooter is similar to the Capture the Flag mode in some FPS games. Specifically, you will find three bases placed in three different locations, and they appear clear on the HUD. Players will use the map to navigate within that environment to ensure enemies do not occupy these areas. In other words, the team that captures three points will immediately win even though the time is long. So always be careful with your enemies. For this game, players will be brought into two guns of two different genres: AR and shotgun. But most players will prefer to use AR because of the convenience and continuity in attacking at different distances. At the same time, AR’s aim is also optimized in many cases to help you deal real damage to opponents. But there is no denying the fear of a shotgun, and it is perfectly suitable for stealth shooting missions.

When it comes to an FPS game, you certainly cannot ignore the number of guns and items that you can find inside the shop of War After: Shooter. Specifically, there will be many different types of guns, such as sniper to MG, for players to choose from. But these weapons are also differentiated by color and rarity. If you want to own these guns, you need to meet their unlocking requirements, such as reaching a certain level. If you use basic weapons, but the enemy uses powerful weapons, what will you do? It is completely simple that you need to use the money in the game to upgrade the weapons you are using. At the same time, you will also know that your upgrade will affect a specific factor that you can foresee. It will help you choose which weapon upgrade is optimal because you will not be rich in resources in the early game.

You are now ready to download War After: PvP Shooter for free. Here are some notes:

1.9.3· Action
MOD Unlimited Money
Home › Games › Action › War After: Shooter v0.988 MOD APK (Unlimited Ammo/Free Reward)
We use cookies on our website to give you the most relevant experience by remembering your preferences and repeat visits. By clicking “Accept”, you consent to the use of ALL the cookies.
Do not sell my personal information.
Cookie SettingsAccept
Manage consent