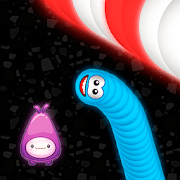 Explore this article
SIMPLE PLAY, ANYONE CAN JOINHIGH SKILLS – USE CREATIVE STRATEGIESFIND AND USE ENGINEERING ITEMS IN WORMS ZONE.IO – VORACIOUS SNAKETHINGS AFFECT YOUR PLAY
Rate this post

Enter the land of worms and participate in dramatic battles with Worms Zone .io – Voracious Snake. Try to make your worm the biggest and longest. It will look huge and dominate the land of worms. Its images and colors can be obtained from the game publisher’s inventory, but you can create your own style, making it huge so that your image appears prominently. 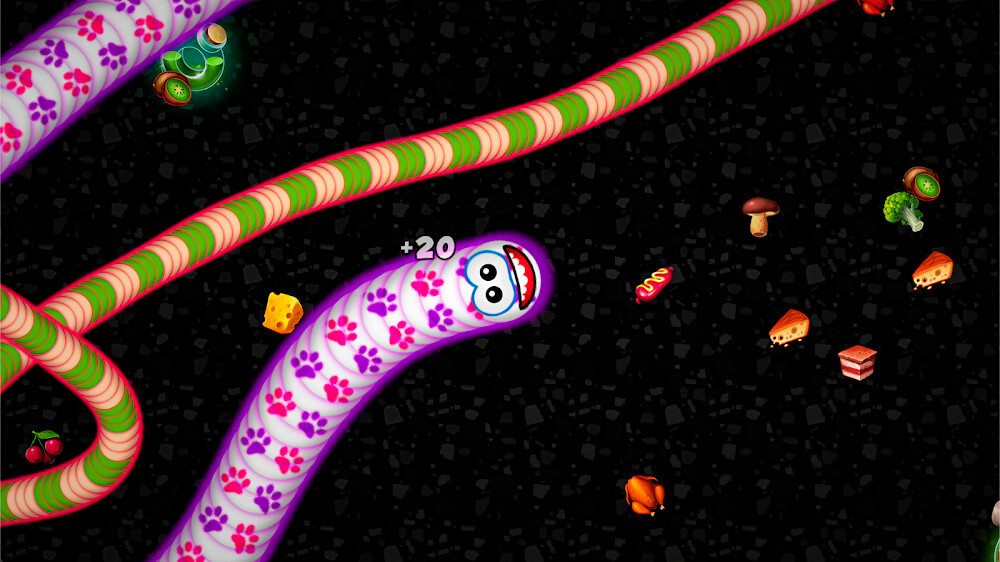 SIMPLE PLAY, ANYONE CAN JOIN

Your job is easy. First, create your own character in the style you want. Move your worm by touch on the screen. Food will be everywhere in the land, and you control your worms to eat it to grow. Of course, if you slow down, the other worms will eat it, but don’t worry, it will reappear in a moment.

There is an easier way to make your worm bigger: to attack other worms by having their heads hit your body. It looks cruel, but Worms Zone .io – Voracious Snake is a fight. You need high skill to do that. Although your worm is smaller in size, you can kill a giant worm with just a small trick. When they die, it will leave a lot of food equal to their size, and you eat them to grow. If you can eat a giant worm, imagine you get a growth potion, you will grow up in a moment.

As noted above, the size of the worm is not everything. No matter how big it is, it can die at the hands of a tiny worm. Therefore, skills are critical, and you can change the situation at any time. However, the large size is also an advantage. There are specific tips provided to make it easier for you in Worms Zone .io – Voracious Snake. 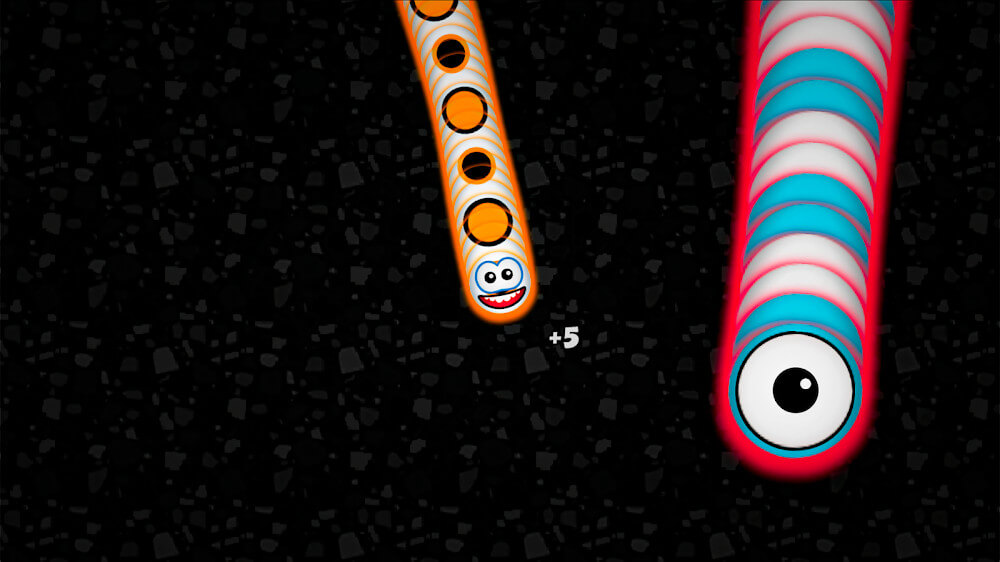 The tactic He who is not afraid of death: As a small worm, it will be difficult for you to grow up fast if you only eat food in the worm land. Thus, use your skills, with the criterion of not being afraid of death, find ways to kill the larger worms and eat them. Of course, it has certain risks, when if you are unlucky, you will be eaten by those giants at any time. However, since the game has just started, you can start fresh again without too much effort.

The tactic Take the opportunity: Sometimes, you can’t kill other worms. However, there is another way to quickly increase your size, by waiting for other worms to attack each other. When a certain worm dies, your job is to hurry up and eat the food created by losers. It looks dirty, but it’s pretty effective.

The Circle of Death Tactic is the god of death for targeted people. However, you have to make sure that you are old enough to do it. When a certain size is large enough, you will find opponents smaller than you, taking advantage of your size to form a circle around the opponent. You continuously move in a circle and gradually shrink the circle. The enemy can only wait for death to come. All you have to do is wait and enjoy. 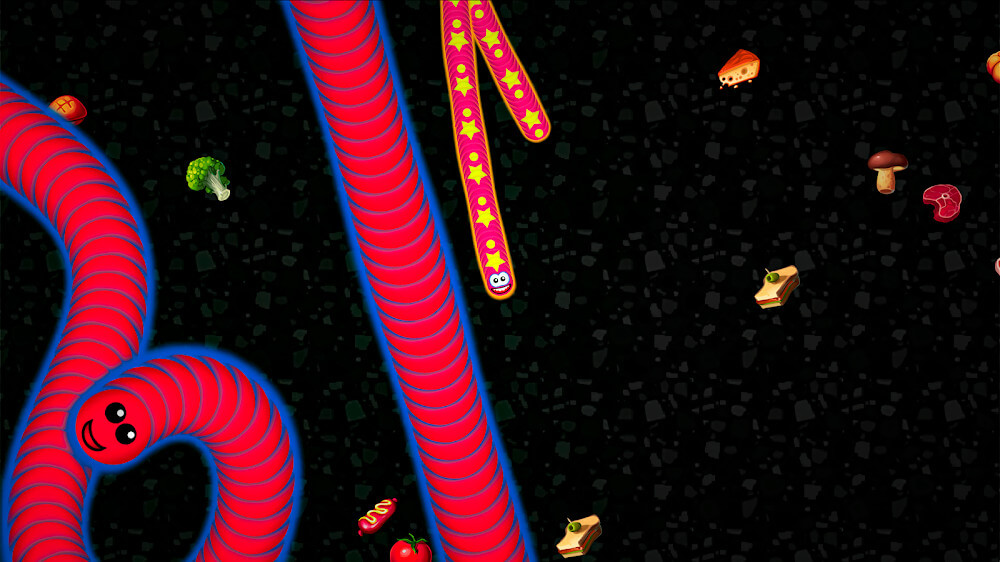 FIND AND USE ENGINEERING ITEMS IN WORMS ZONE.IO – VORACIOUS SNAKE

Somewhere in your land, there will be enhancement items. When eaten, it will help the size of the worm increase faster, and there are items to support movement speed or food with great score value. Search and capture them to speed up your growth. However, some items will cause many unwanted effects, and you must be very wise in your choice.

It will be annoying if your worm is massive but is killed, and you have to start from scratch, so being careful is essential. You have no right to make any mistakes. However, there will be cases of inhibition for players. Since this is an online game, wifi or mobile network is a significant factor. If you’re moving, but lag occurs, your worm will die at any moment. The touch element on the screen also ensures enough sensitivity. Otherwise, it will be difficult to manipulate it properly. One more note that you have to keep your composure during the game. Sometimes you will be rushed or annoyed when your game is not as expected. 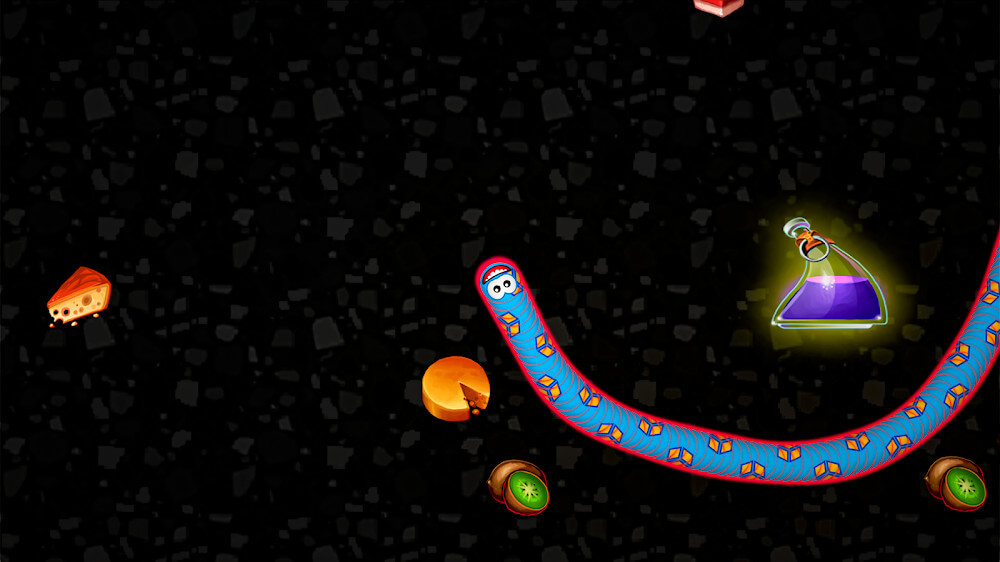 The bugs that occurred in the previous version have been fixed in this update. With over 2 million reviews and tens of millions of engagements, Worms Zone .io – Voracious Snake certainly won’t satisfy all customers, but we’re doing the best we can.

We constantly update our game to make it even better for you. This update includes performance improvements and bug fixes. • Bugs fixed

You are now ready to download Worms Zone .io - Hungry Snake for free. Here are some notes:

Home › Games › Action › Worms Zone .io
We use cookies on our website to give you the most relevant experience by remembering your preferences and repeat visits. By clicking “Accept”, you consent to the use of ALL the cookies.
Do not sell my personal information.
Cookie SettingsAccept
Manage consent