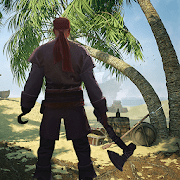 Nowadays, the game of survival has become popular. And when I mention this, you will probably think of popular shooters like PUBG Mobile or Fortnite. Last Pirate is an adventure survival game, allowing you to freely survive on a realistic desert island. You will have to use your instincts to survive in nature. The food supply is running out, without help, while surrounded by dangers, what will you do?

Last Pirate tells about the survival journey of a pirate. He used to have a very large ship, with dozens of sailors. Unfortunately, the boat sank when it encountered a large storm at sea. That took most people’s lives, while the captain was more fortunate to get lost on a deserted island.

He woke up on a deserted beach, a wild landscape in front of him. Anxiety began to surround the narrow space in the middle of the ocean, when food was swept away by the storm, he had no more boats to seek relief. The pirate will have to use the oldest instincts of humanity to survive on a deserted island, without people or modern tools. No one knows on this island, what awaits him.

As mentioned, Last Pirate is an actual survival game. You play the role of a pirate captain and are taken to a deserted island in the middle of the sea.

With the harsh circumstances of nature, you will have to do everything to survive. Starting from finding sources of food and water. Look for some fruit trees on the island, like bananas and coconuts. Some players ignore this, causing the character to lose energy gradually, leading to a state of exhaustion, and unable to continue playing. Besides, you can also use the hook attached to the character’s hand as a weapon to catch fish, chickens or boars. They provide a very rich source of food.

After you’ve solved the food problem, you need to find and exploit resources. They are rocks, wood or cloth. You can combine resources to craft weapons and a base.

Overall, the first piece of Last Pirate content is quite simple, just requires you to try to stay healthy to collect resources, build buildings and understand how the game works. However, that is not all you have to face in this game. On this island, you are not alone. The zombies and mutated creatures are waiting for their ill-fated prey. You need to constantly upgrade the strength of your character, craft tools and weapons to fight them.

Last Pirate introduces you to the opening scene, but the content behind is not revealed by the developer. However, you can explore the scenarios later through the game’s quest system.

In the first place, the quest system was like a tutorial on how to play. They simply want you to find some bananas, a wooden stick and build a bridge to the sea. After that, the task becomes more difficult as you have to face the hordes of ferocious pirates in the new land.

But in return, Last Pirate also gives you achievements and attractive rewards. They help you grow as you unlock new technologies.

Last Pirate is a survival game with realistic graphics. It is designed with a detailed environment, containing most of the elements you might encounter in nature such as bush grass, large tree stumps, wild chickens, wild boars, coastlines and many creatures and real life.

Besides, the game also has realistic weather effects and day/night cycle. When the sun comes out, you can notice rays of sunlight oblique through the foliage. This time is suitable for hunting, finding food and gathering ingredients. When night falls, the mist brings many dangers. You should have a solid construction to shelter, with the powerful weapon to protect yourself.

In addition, Last Pirate also has a lively sound. They are mostly captured in real-world environments, from the hums of foliage to the roars of predators.

Last Pirate is a pirate-themed survival game where you have to fight the zombies and the most aggressive pirates to survive. Can you survive on a deserted island, not even a shadow of people? Experience the game and let us know the answer.

You are now ready to download Last Pirate: Survival Island Adventure for free. Here are some notes:

· Social
MOD Many Feature
Home › Games › Adventure › Last Pirate 1.0.0 APK + MOD (Unlimited Money)
We use cookies on our website to give you the most relevant experience by remembering your preferences and repeat visits. By clicking “Accept”, you consent to the use of ALL the cookies.
Do not sell my personal information.
Cookie SettingsAccept
Manage consent